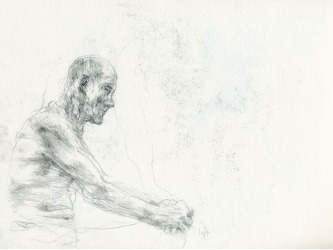 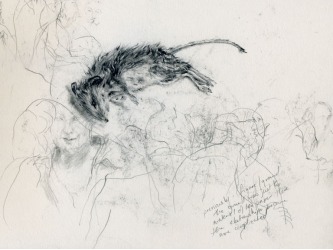 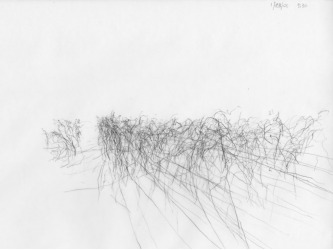 De-skill Re-skill is a project by Juliet MacDonald involving an exhibition and residency, taking place at Drawing Spaces.

The exhibition consists of drawings produced over a number of years representing a continuous line of enquiry. This has been an investigation into the status of the body and into the activity of drawing as a mode of embodied knowledge. The drawings show an increasing concern with the body as an entanglement rather than a singular entity.

A series of 64 drawings were conducted in four public locations around the city of Leeds, a selection of these are on display. The attempt to draw bodies moving through an urban space produces a tension, which arises from the effort to make a separation between spatial and temporal experience – to fix an outline in one position, or alternatively to track a movement. The drawings fail to capture the appearance of expressions, faces, and bodies, advancing toward me or receding from view. Carefully learned drawing skills are confounded by the slipperiness of these fleeting perceptual experiences.

Alongside these are a number of notes, diagrams and workings, extracted from numerous files. The action of opening out these files and hanging up a selection of drawings for public view provides an opportunity for reappraisal. While these drawings are on display they will be re-arranged and re-categorised using systems of tagging, colour-coding and numbering. Included with written notes are drawings made quickly from glimpses of faces and also a number of elaborate doodles that enact a regression away from the written word and the skillful act of drawing.

Drawing residency
Concurrent with this exhibition, a series of new drawings will be conducted in order to examine the manual, visual and tool-using elements that constitute drawing as a skilled practice.

In the 1960s and 70s a number of artists challenged the conventions of drawing: Richard Long’s A Line made by Walking in 1965 eliminated the hand, the tool and the art object from the process of making a linear statement; in 1968, William Anastasi made Unsighted Drawings in the pockets of his trousers in a rejection of visual control; Robert Morris in his Blind Time series from 1973 touched the paper directly with his hands, without the intervention of any tools. My objective is to re-visit some of this history of undoing in a systematic way, and then to experiment with ways in which my own practice can be put back together to incorporate both dexterity and clumsiness, vision and blindness, figurative conventionality and animal immediacy.

Week 1 – De-skill
I will start from a skilled drawing approach: using eyes, my right hand and a drawing implement. One by one these elements will be removed. Finally the zero point will be reached: walking blindfolded on a piece of paper, using graphite powder to make the drawing.


Week 2 – Re-skill
From this basis of bipedal walking, the elements of tool-using, dexterity and visual judgement will be re-introduced systematically. However, I will attempt to maintain a continued awareness of the parts of the body and the senses that had been brought to the fore by the unskilled approaches. The intention will be to find out if this expanded awareness can continue to inform and inhabit the practice even once the familiar bodily apparatus for drawing is re-instated.